While cooking my Chicken Korma recipe, I thought I would make my life a little more fun (or should that be difficult) by making a second curry dish for the first time too, on our curry night. This is one of my girlfriends’ favourite currys, so had a search online and came across this Vegetable Balti Curry recipe on the BBC Good Food site. I knew she would be happy when telling her it would be high in fibre and vitamins, while low in fat and hopefully very tasty!

This recipe sounded perfect, though I wish I could have made the paste for this as well as the Korma! Instead, I had to get a jar of Patak’s Balti curry paste which I had never used before, but fingers crossed was hoping would do the job ok.

After getting all the ingredients for the Korma ready and having made the Korma paste, I set about peeling, chopping and cutting all the veg needed for this dish. I didn’t use all the same veg as mentioned on the Good Food site but used what I had in my vegetable racks, which was close enough! My only major change was using parsnips instead of turnips and only using half the amount of butternut squash and making up the rest, using some sweet potatoes that needed to be used up.

I found this such a simple recipe to make and was really glad I could leave this to cook and simmer while working on the more complex Korma at the same time.

The best part about this curry, was the fact my girlfriend and I both thought it tasted as good as the Vegetable Balti from our local restaurant. We ate half of it on our curry night and froze the rest in the hope of having it again one night soon! This I think, will become a regular home favourite with us.

1 Heat the oil in a large pan, then add the onion, garlic and apple and cook gently, stirring occasionally, until the onion softens, about 5-8 minutes. Stir in the curry paste.

2 Tip the fresh vegetables into the pan and add the tomatoes and stock. Stir in 3 tbsp of the coriander. Bring to the boil, turn the heat to low, put the lid on and cook for half an hour.

3 Remove the lid and cook for another 20 minutes until the vegetables are soft and the liquid has reduced a little. There should be some liquid remaining, but not too much. Season with salt and pepper.

4 Mix 1 tbsp of coriander into the yogurt to make a raita. Ladle the curry into bowls, drizzle over some raita and sprinkle with extra coriander. Serve with the remaining raita and warm mini naan breads. 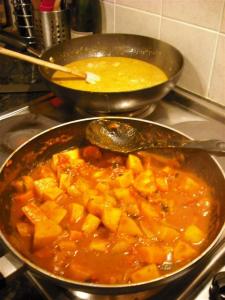